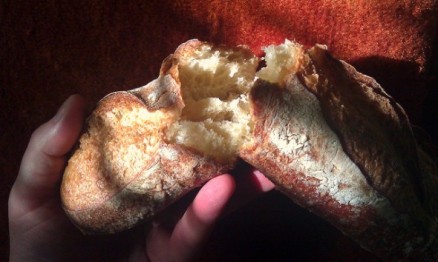 I am reflecting on a wonderful yet simple communion service yesterday, held in the context of the busyness of a Comfort Zone session, with many things going on around us ( conversations, people being helped with clothing, last meals being served and more, a few ( 12) of us gathered  inside the communion rail, so we can stand in a circle around the table.

I give notice that we will be gathering for communion about an hour before we do, and repeat the invitation 2 or three more times through the evening, even over a cupole of hours people do forget, not because they don’t care but because many live complex chaotic lives that are difficult to manage.

We use a simple liturgy always beginning with a prayer of praise, and an acknowledgement of our need; so we gathered and we prayed, and we sang, we sang Amazing Grace, we always do. Then, after a time of quiet I began to tell the story and to pray for the Holy Spirit to be present to and tangiably with us as we broke and recieved bread and took the cup of wine. It was at that point that I noticed that more people had gathered, and were begining to gather. One woman who had refused my initial invitation was suddenly there, inside the rail, three more came, one literally climbed over the rail, while another found his way round it.

There was a real sense of entering onto Holy Ground, and of people literally being drawn to join us by the power, love and grace of God, the presence of the stark and bare Lenten cross on the platform added to the atmosphere as we became aware  of the sacrifice that Jesus made in a deeper way, and not in a way that I can explain.

As I placed bread into the hands of some of those gathered, I was prompted to offer other prayers for them, prayers or healing and hope and peace, and as we shared the cup ( we use a common cup) people were drinking more deeply than they have before, a sip of the wine was not enough ( and for those who wonder, it is non-alcoholic wine as is always the case in a Methodist Church).

Now some for whom decorum and right practice is paramount might have been disturbed by what was going on, but I am convinced that Jesus would not have been, afterall he was not upset by someone being lowered through a roof, nor by breaking the Sabbath laws to allow the breakthrough of grace, and it is that breakthrough of irresistable grace that I believe we saw last night, it is grace that drew people who had previously declined the invitation, and grace that brought them climbing over the rails to come close. It was grace that met us in the bread and gulps of wine, and grace that surrounded us as we gave thanks singing together “Thank you Lord for loving me!”

This was not a carefully planned or advertised event, we broke with convention and probably some rules too, but God was with us, and we knew we were all welcome at that table without doubt or question. The service finished as we prayed for one another and in the blessing. As I left the platform I chatted to C who asked for further prayer, so we stood for a few moments in front of the Lenten Cross and placed ourselves into God’s hands. It was C who noticed the significance of where we were standing.

How do I describe myself, I am not what I do, (I am a Methodist Minister), I am not who I am related to (I have 5 wonderful children, and 2 lovely granddaughters). I am a seeker truth, a partaker of life in all it's fullness and a follower, sometimes stumbling, sometimes celebrating of the Christian pathway. I seek wholeness, joy and a connectedness to all things through a deep reconciliation with the God whose love blows my socks off!
View all posts by Sally C →
This entry was posted in community, Uncategorized and tagged communion, community, grace, welcome. Bookmark the permalink.

1 Response to All are welcome….